Leader(s) in the Field / Exemplary Work(s)

In the film I utilized only ADR recorded after production, with the goal of higher quality audio not muddled by background noises. This can be seen on the timeline of the film, where you can see all the audio files used are green, meaning none of them came from the camera while we were in production.

Seen in the wide green bar stretching the length of the timeline, I had a long take of ambiance from where I recorded the other sounds in post-production. This background sound is used to make the static of the audio clips consistent and smooth.

I had multiple sources of audio throughout production, the first while filming was used to better line up audio acquired with the shotgun mic in post-production. This is seen in my bank of audio files that I used for the film. 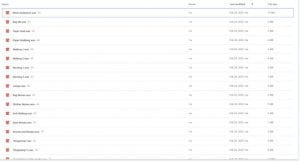 Also evidenced by my list of audio files is that all the sound effects and Foley for the film were recorded after production. This was done to keep background static consistent and give audio we would expect as viewers from things we might not have heard from the live audio.

In order to get the highest quality sound I was capable of achieving, I checked out recording equipment and spent part of a night in a desolate woodland attic recording all the Foley sounds I knew I needed, as well as all of my lines for ADR. Because of this, only about a fifth of audio was recorded in the classroom, and much time was saved that could be used for other things.

The members of Team 3, even in the absence of a Trello board, kept in contact daily about what needed to get done for us to finish. Without being told to do a stand-up meeting, we would generally start each day talking about what we were all going to do that day to work towards the end goal. We didn’t give our jobs to others, but we all filled roles when it was needed in the case of absence.

For this project I used YouTube tutorials on ADR, recording decks and shotgun mics, Premier Pro and Google Drive.

Ways of Living in the World

In this session more than any other, I felt a harmonious relationship with my teammates. I could rely on them and they could rely on me. In a perfect world, I would work through everything in this way. Working as a team player will definitely be useful in future careers.

Reactions to the Final Version

Keith remarked that he was, “…impressed by the amount of sound you recorded, and how clean it was that it flowed together…”

Sam had written that “Sound was well done, voices were clear and sound effects were easy to hear and understand.”

The story we made was simple. The premise was easy to understand and delivered more through implication than dialogue.

The film we made had an unexpected ending, made to be endearing for the audience’s benefit.

The film we made was emotional, people can probably relate to the more pessimistic person.

Our story was concrete, it had a beginning, middle and end.

During this session, I have learned the importance of collaboration and time management. There is not a single component of what I did during the session that would be as it is if not for the aid and guidance of my peers.

The tool “Grammarly” was used to check spelling and grammar in this paper.

Welcome to your brand new blog at Edublogs!

To get started, simply visit your blog’s dashboard, edit or delete this post and check out all the other options available to you.

We can walk you through step-by-step in our guide to getting started with your blog.